I have been using washing soda in my home for years – also called sodium carbonate, I use it as a natural cleaner, and as an ingredient in my homemade laundry soap as well as my dishwasher powder.

I really love my homemade laundry soap and dishwasher powder – they are simple, easy to make and super effective, not to mention the ingredients really are a breeze to find (and safe for my family). The beauty of DIY is that sometimes the most simple things can indeed be the most effective. 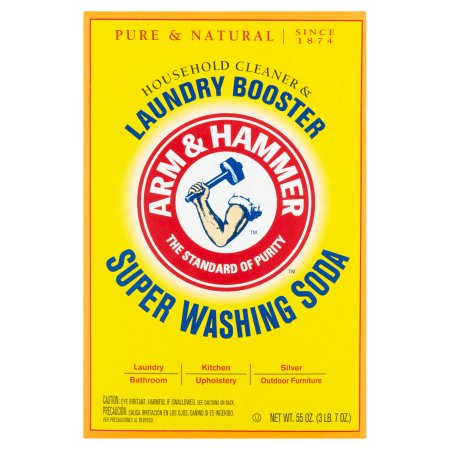 What is Washing Soda?

Washing soda, also known as sodium carbonate, is a water soluble sodium salt of carbonic acid – it’s an incredible natural cleaner due to its proportions of sodium, carbon and hydrogen.

Washing soda is often times called soda ash, because one of the sources is the ashes of burned plants.

How does washing Soda Work?

Don’t confusing washing soda with baking soda because although they are closely related, they are different items.

Washing soda is wonderful for removing stains in laundry – it’s very alkaline, and it serves as a solvent in your laundry for treating a variety of stains. If you buy commercial detergent it is used to treat hard water as the soda binds to the minerals which make water hard and allows the detergent to be absorbed into the fibers that allow those clothes to get clean.

The washing soda softens the water to help lift out the yuckies in your clothes and suspend that yucky stuff in the wash waster.

While you can use it as a pre-soak in your laundry for the toughest stains, you can use it to make your own laundry detergent powder too. Outside the laundry room, you can use it for pots and pans (it really works well for the nastiest build up .. or if you burned something that you need to get off) to scrubbing toilets and even in an all purpose spray to clean hard surfaces like your kitchen counter.

Where to Buy Washing Soda

One of the most popular places to buy washing soda is at the grocery store, where it’s sold on the shelf in the laundry aisle in a 55 oz box for $5 – $6. Sometimes if you are lucky you can catch it on sale for $3 .. but in most cases it’s anywhere from $4 – $6 depending on what store you shop at.

Thankfully, you can make it yourself at home – and you are probably asking “why would you want to when you can buy it?”

If you are outside of the U.S., it can be hard to find washing soda – not only that, it gets expensive. Sure, $5 – $6 may seem relatively cheap, but it’s actually not all that cheap. As a family of 7, we use lots of laundry soap – so a box of washing soda may last 2 weeks..  it’s far cheaper to make it myself.  You can make washing soda from baking soda in your home oven easily and save money at the same time.

Using heat for a long period of time will turn the structure of that sodium bicarbonate (baking soda) into sodium carbonate while releasing excess carbon dioxide steam.  You can even go a step further and make this a fun science lesson for your kids

How to Make Washing Soda from Baking Soda

If you are struggling to find washing soda in your area or, like me, if you feel like washing soda is just too pricey and you would prefer an avenue with a lower cost, you can make your own washing soda at home. 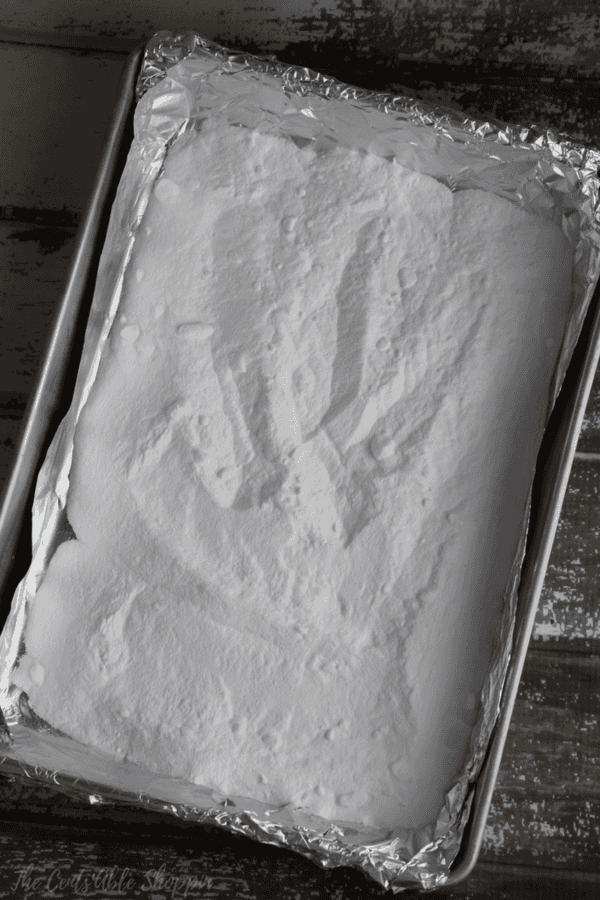 Baking soda (sodium bicarbonate) is very inexpensive and abundant – you can pick up a 13.5 lb bag at Costco for just a few dollars. Simply heat that baking soda to release the carbon dioxide and water molecules .. and you will have soda ash (washing soda).

Making your own washing soda from baking soda is super easy and requires just a few simple steps.

I usually dump mine in a really large bowl 6 C. at a time and immediately turn around and use it for homemade laundry soap.

Should you Make your Own Washing Soda?

For me – YES. It makes more sense to save. Sure, I’m turning on the oven for 2 hours, but that’s costing pennies. I use 3 boxes of washing soda each month for laundry and dishwasher – which runs $17 – $18 + tax, not to mention hauling kids to the store.

I can buy the large bag of baking soda at Costco and it will last me 2 months – quite a savings. Not to mention the gas saved going to Costco every other month and having to tote the kids.

But.. if you don’t make your own laundry detergent, is it helpful to make your own? Probably not – you have to determine if it’s a cost effective method for your family.

Do you use washing soda regularly?

If so, what is your favorite DIY?