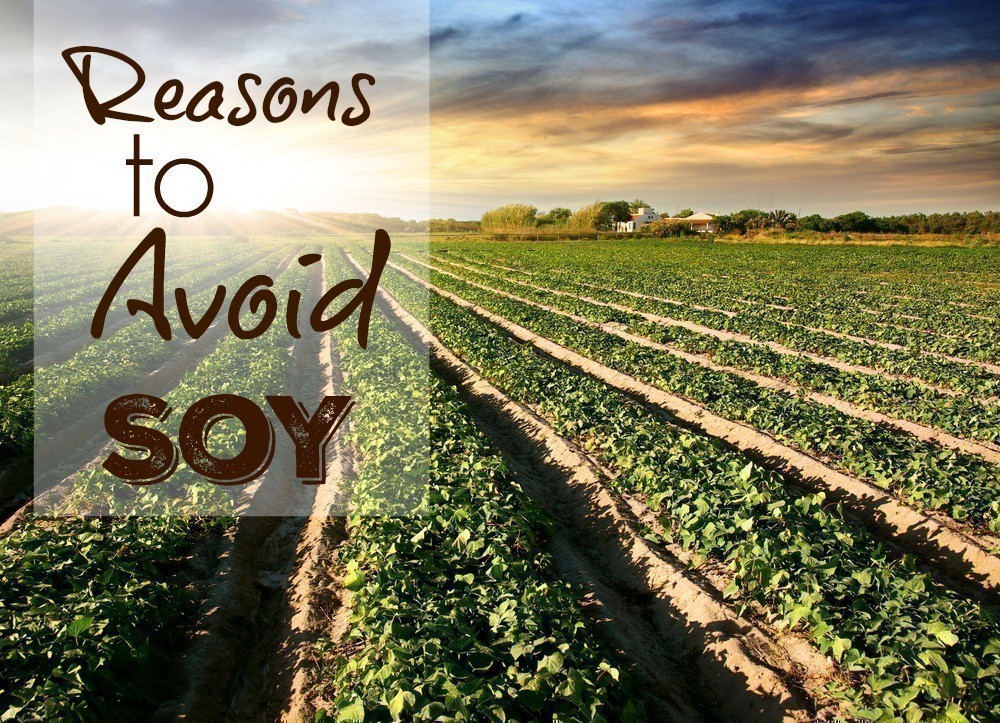 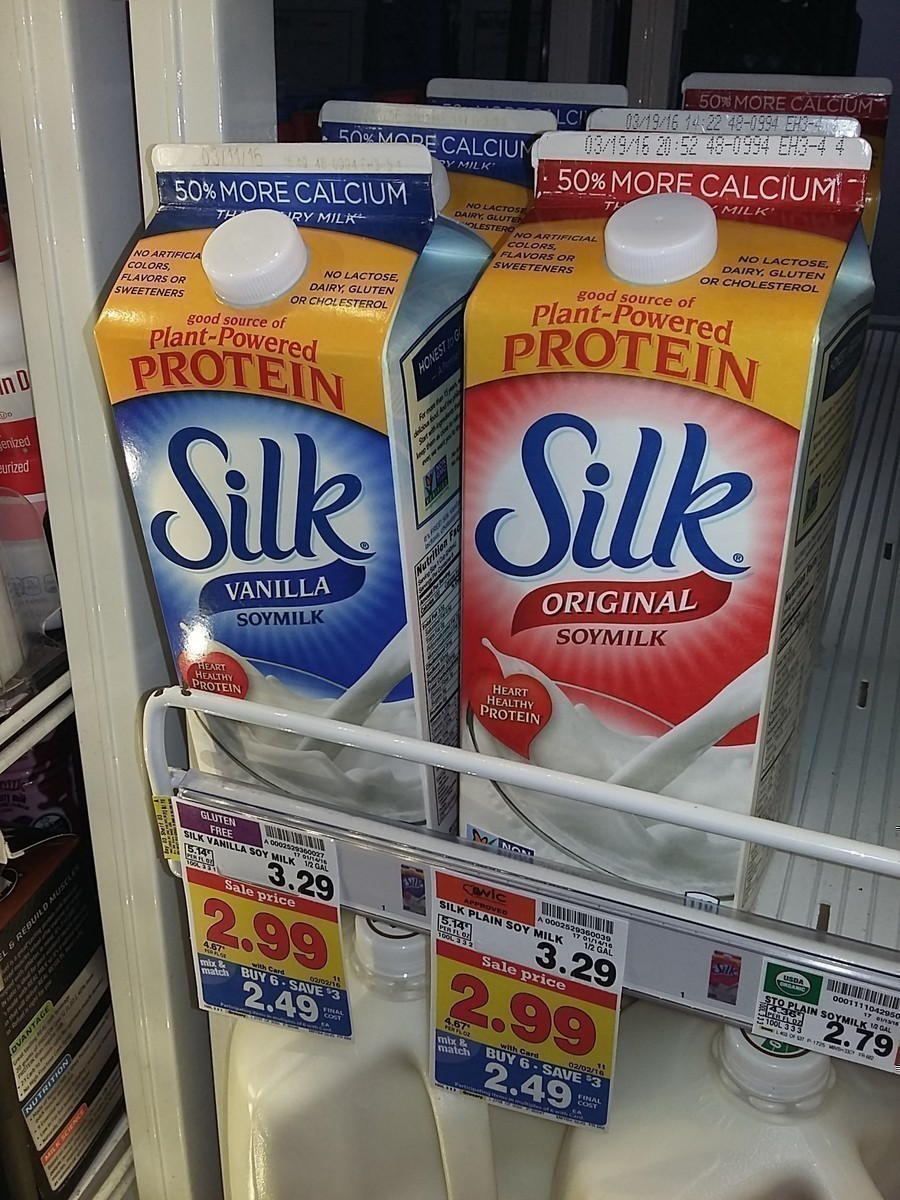 Hate to say this, but Soy is NOT a good alternative ..   this is one item you will never find in my refrigerator.

Phytic Acid:  Blocks the absorption of calcium, magnesium and zinc, in addition to many other minerals.

Phytoestrogens: (or, Isoflavones) are estrogen-like compounds which can have an effect on hormones.

Trypsin Inhibitors: Proteins in Soybeans that inhibit digestion and prevent the absorption of nutrients.

But are these items REALLY that bad?

Soy is NOT a healthy item and can cause quite a few health problems.   We have talked about the growing use of pesticide on our crops, and Soy is NO exception. Over 90% of the Soy in the U.S. is genetically modified … and sprayed with Roundup which can have an effect on your health.

MOST of the Soy in the U.S. is used to produce Soybean Oil – which is extracted using the chemical solvent hexane.

The remainder left after the fat has been extracted is Soybean Meal – which is 50% protein. That soybean meal is used to feed livestock and further processed to produce soy protein.

Soy is cheap – and therefore is used in almost ALL types of processed foods… most people pick up boxes off the shelf without even knowing that it’s in there. It’s also part of your Tofu, Soy Milk and Non-Dairy Products. Unfortunately Soy Protein is a major ingredient in Soy-Based infant formula.

Although Soybeans Do contain some important nutrients (Iron, Calcium, Thiamin, Folate, Manganese, etc.), they are ALSO very high in Phytates – which can bind minerals and prevent absorption.

Soy inhibits the body’s ability to absorb iron, copper, calcium and zinc – as well as magnesium.

Soy and its Effect on Men & Women

The same dangers that Soy has for Women who are expecting are also just as worrisome for women who are looking to conceive.

Soybeans contain phytoestrogens (which can mimic the body’s hormones..) – consuming soy products can lead to heavy or longer menstrual periods in women (here and here). .. and is one of several factors causing early puberty in girls. Soy can also lead to low sperm balance in men, infertility and sexual disfunction.

Even if you stay away from Tofu and Soy Milk you are STILL probably consuming large amounts of Soy – all processed foods contain some form of Soy.  Look at your food labels for Soy Lecithin, Soy Protein, Soy Protein Isolate, Texturized Soy Protein, Hydrolyzed Vegetable Protein or any other phrase containing “Soy”.

Soy is a common alternative to baby formula, and in most cases, the first item recommended by doctors with babies who have trouble digesting regular dairy based formula. In fact, 25% of american babies are fed soy formula.

Phytic acid prevents the absorption of minerals that are critical to newborns – calcium, magnesium and ainc – Zinc is crucial to the developing brain and nervous system (especially for babies, at a time when the brain is growing at a rapid rate..)

Then there are Phytoestrogens (Isoflavones) – which are estrogen like compounds that can disrupt the baby’s hormonal system – feeding an infant soy formula is the equivalent to 5 birth control pills a day. Flooding the baby’s bloodstream with those can affect their development – it can lead to early puberty in girls, and have the opposite effect on boys (delayed maturation)… and lead to fertility issues later on in life.

Soy Formulas also contain Corn Syrup and Sugar – and can also have a severe effect on the brain… and be disruptive to neurotransmitter systems – which are correlated to autism, seizures, ADHD and other neurological disorders.

That’s a LOT to think about – especially if you have been and do purchase Soy-based items, especially items such as Silk Milk.

What about Organic Soy?

Organic Soy may provide a better quality OF Soy (not sprayed with Roundup herbicide), they STILL have the same problems as GM soy – high levels of phytic acid, hormone disrupting plant estrogens that can affect not only babies but also women, men and the hormonal systems of girls and boys.

If breastfeeding is not an option, Raw Milk is a great option even for children – many babies who are allergic to commercial dairy can sometimes have no problems with raw milk (you can buy Raw Milk at Sprouts).

In the end, there are SOME GOOD factors in soy prepared (with fermentation methods – like Miso, tempeh and natto… when eaten in small amounts.  Otherwise the Soy industry is rather powerful -marketing through coupons and advertising is huge – which should make anyone skeptical. 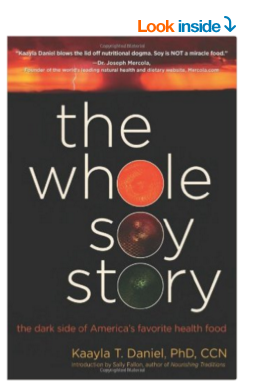 Take it upon yourself to do your own research – you can learn more about Soy by reading this book, The Whole Soy Story: The Dark Side of America’s Favorite Health Food… or pick up on Kindle.