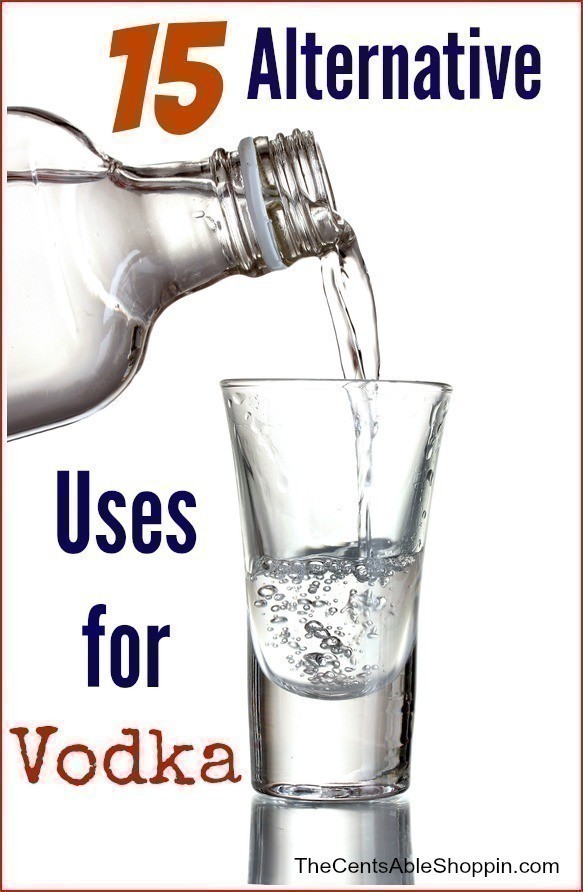 Just a few months ago, we were fortunate enough to score some incredible deals on Vodka – at Bashas, and at CVS. Many of you have also picked up deals at Albertsons as well.

Although it did require some out of pocket expense, the deals made for the best gift ideas – for less than $1 you had a gift for friends or even family.  Even if you don’t drink the bottles make great items to repurpose … you can use them for Wind Chimes and even Lamps in your home and use the actual Vodka around the house.

We don’t drink but, we do have one bottle of Vodka in the liquor cabinet in the house, and I broke it out today to make some cleaner – talk about some weird looks from Dave.. he had NO idea what I was doing. I’m pretty sure he thought I was going to have a drink… ;)

You don’t have to drink to take advantage of the deals previously posted – if you stocked up on cheap bottles, you can find many ways to use the Vodka around the house, from getting rid of smells in your clothes to upholstery stains, preserving flowers, and even as part of your beauty regime.

A sore throat can be treat by gargling Vodka and Water.

Dilute Vodka in a spray bottle and spray inside stinky gym shoes or boots to remove odors (this works especially well on those boots you wear all day if you work outside).

Preserve your flowers by mixing 5 drops of Vodka with a teaspoon of sugar and put in the vase with Water.

Dilute it with water and spray on your windows… it works just as well as Windex, and won’t streak up.

Remove Musty Smells in clothes by putting Vodka in a spray bottle & spraying on your musty smelling clothes.  After you spray hang up in an open area to let the clothes air out.   This is cheaper & a better alternative than Dryel.

Vodka can remove upholstery stains when you rub on the stain with a soft cloth.

Use as an all purpose cleaner in the kitchen by mixing 1:1 with water and spraying on counters, cabinets, and windows.

Vodka kills weeds just as effectively as Vinegar does. In a spray bottle, mix 1 ounce of Vodka, a few Tablespoons of Dish Soap (Dawn) and 2 Cups of Water. Apply in sunny, dry temps.

Put Vodka in a spray bottle and spray it on your tile in your bathroom tile – let sit 30 minutes and then scrub the grout with a toothbrush while you shower to remove the stains more easily.

Add a shot glass of Vodka to shampoo OR conditioner to remove build-up in your hair – it detoxes your scalp and makes your hair shiny and smooth.

Vodka prevents rust – prolong the life of your razors by soaking them in Vodka once you use them (this is great for the more expensive razors – you probably won’t want to do this with the disposable razors).

Vodka does wonders for a toothache – swish it around in your mouth – you can add Clove Oil too (which is super for toothaches).

Make your own astringent by brewing up 8 oz of Green Tea, and adding in 1 tsp of Vodka – use a cotton ball.

Use it in your pie crusts by substituting 1 Tablespoon for every 3rd Tablespoon of water when you mix up the crust… don’t worry – the smell will evaporate as it bakes.